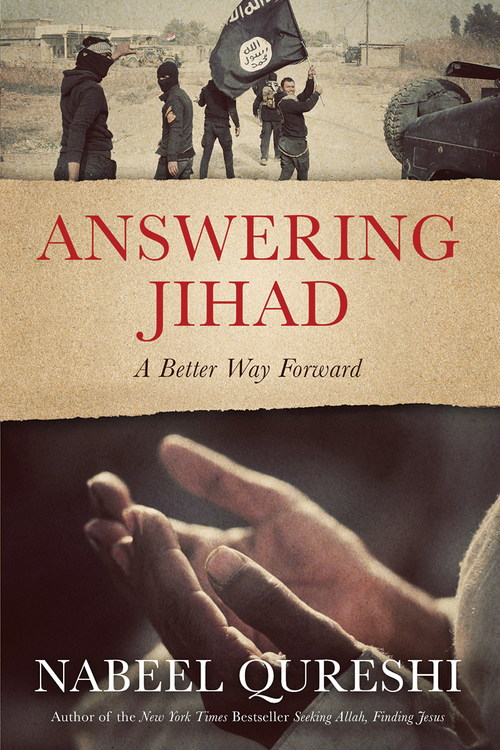 This is the second in a 17-week series from Answering Jihad: A Better Way Forward by Nabeel Qureshi, author of Seeking Allah, Finding Jesus. Weeks one through sixteen will cover sixteen questions people most commonly ask Qureshi about jihad. These questions explore the origins of jihad, the nature of jihad today, and the phenomenon of jihad in Judeo-Christian context. After answering these questions, Qureshi will conclude by proposing a response to jihad, in his view the best way forward. His concluding remarks will be presented in week seventeen.

You can order the book from Amazon by clicking here.

QUESTION #2 – IS ISLAM A RELIGION OF PEACE?

Nabeel Qureshi writes, “Since I was born, I was taught by imams and my family that Islam is a religion of peace. What is surprising, in retrospect, is that this popular slogan may not have been around much earlier than that.”

THE MEANING OF THE WORD ISLAM

Mark Durie, a research scholar of Linguistics and Islam at Melbourne School of Theology, informs us in an article for the Independent Journal, “Islam was first called the ‘religion of peace’ as late as 1930, in the title of a book published in India… The phrase was slow to take off, but by the 1970s it was appearing more and more frequently in the writings of Muslims for Western audiences.”

Whether or not one agrees that the slogan first appeared in the twentieth century, it is beyond dispute that the Qur’an never says, “Islam is the religion of peace,” nor do the traditions of Muhammad. This common misconception may stem from another, the oft-repeated assertion that the word Islam means “peace.” It does not. The Arabic word Islam means “surrender,” though it is related to the word for peace, which is salaam. Durie sheds light on the nature of the relationship and the origin of the word Islam: “The word Islam is based upon a military metaphor. Derived from aslama, ‘surrender,’ its primary meaning is to make oneself safe (salama) through surrender. In its original meaning, a Muslim was someone who surrendered in warfare.”

In an Islamic community, Muslims are taught that the “surrender” of Islam was a submission of one’s will and life to Allah, which Qureshi argues is noble and does not connote violence. But to contend that the word Islam signifies peace in the absence of violence is incorrect. Islam signifies a peace after violence, or under the threat of it. According to Islamic tradition, that is how Muhammad himself used the word. His warning to neighboring tribes is famous: Aslim taslam, which means, “If you surrender, you will have peace.” It was a play on words, as aslim also connotes becoming Muslim: “If you convert, you will have safety through surrender.”

So the word Islam refers to the peace that comes from surrender. Peaceful Muslim communities today present that imagery as a spiritual peace with Allah, but records of Muhammad’s life indicate that the notion of submission was also used in military contexts.

FROM ETYMOLOGY TO HISTORY

A more appropriate avenue for answering whether Islam is a religion of peace is the life and teachings of its prophet, Muhammad. The Qur’an and the traditions (hadith) of Islam’s prophet are far more definitive than the etymology of the word Islam. Qureshi plans a more in-depth discussion in Question #4, but suffice it to say for now that no one can honestly deny the presence of violence in both the Qur’an and the life of Muhammad. From the time Muhammad first obtained a following that could successfully fight, he launched raids and battles every year until he died. According to David Cook in Understanding Jihad, he commissioned or personally participated in eighty-six battles during that time, which is more than nine battles a year.

The Qur’an refers often to these campaigns, many times in approbation. For example, Chapter 8 of the Qur’an is about the Muslims’ first major battle, the Battle of Badr, and it teaches that Allah is the one who led the Muslims, that he compelled the Muslims to attack the Meccans, that he supplied them with angelic assistance, and that he was the one who slew the Meccans through the hands of the Muslims. There is no avoiding the presence and even the glorification of violence in this chapter, or elsewhere throughout Islam’s origins.

The battles of the early Muslim community seem to have escalated in a crescendo toward the end of Muhammad’s life, not halting with his death, but rather catapulting into global proportions. As soon as the prophet Muhammad died, there came the apostate wars, then the overthrow of Persia, and then the campaigns of Egypt and beyond. Within two centuries of the advent of Islam, Muslim conquests expanded Islamic territory from the shores of the Atlantic well into the valleys of India. At the end of that era, the most influential hadith collectors gathered whole books documenting Muhammad’s conduct and commands during times of warfare. Shortly after them, the great Islamic jurists systematically codified Sharia, Islamic law, devoting whole branches of jurisprudence to the proper practice of warfare.

For these reasons, no one can claim that “Islam is a religion of peace” in the sense that the religion has been historically devoid of violence, neither in its origins nor in the history of the global Muslim community. Apart from the first thirteen years of Islamic history, when there were not enough Muslims to fight, Islam has always had an elaborate practice or doctrine of war.

IN WHAT WAY MIGHT ISLAM BE A RELIGION OF PEACE?

Qureshi says, “In my experience, most Muslims who repeat this slogan have not critically considered the history of Islam. Those who have and [who] continue to say it mean it in one of two senses: a spiritual sense or an idealized sense.” In the spiritual sense, it is understood that Islam brings peace to a person through personal discipline, a right relationship with other Muslims, and submission toward the Creator, Allah. This sense of the slogan is irrelevant as a response to violent jihad.

In the idealized sense, it is generally meant that Islam brings peace to this world. Though battles have been fought, they were fought out of necessity. Ideally, the goal that Islam strives for is peace throughout the world. According to this sense, Islam can be a religion of peace despite the presence of war, so this sense of the slogan is also irrelevant as a response to violent jihad. (Some who espouse this view argue that the wars in the foundation of Islam were defensive endeavors, and argument that Qureshi will consider in Question #4.)

THE WEST AND THE RELIGION OF PEACE

Unfortunately, neither of these more viable and nuanced approaches appears to be in mind when Western media and Western leaders proclaim that Islam is a religion of peace. Rather, such proclamations appear to be little more than attempts to change public perception of Islam, albeit for a noble cause such as precluding retaliation against innocent Muslims. We often hear the loudest proclamations of Islam’s peacefulness in the wake of the most heinous jihadist violence. President George W. Bush called Islam peaceful after September 11. Prime Minister Tony Blair called Islam a peaceful religion after the July 7 London bombings. President François Hollande make the same proclamation after the Charlie Hebdo massacre. This regular juxtaposition of extreme Islamic violence with a strong insistence that Islam is a religion of peace is obviously jarring, and not just to Westerners.

The Syrian Sheikh Ramadan al-Buti, considered one of the most influential traditionalist Sunni scholars in the world today, saw an insistence on Islam’s peacefulness as an effort by the West to emasculate Islam. If Western leaders and Western media repeat it enough, perhaps Muslims themselves will begin to believe it. He asserted in The Jurisprudence of the Prophetic Biography that the West was seeking to “erase the notion of jihad from the minds of all Muslims.” In asserting this position, the sheikh showed characteristic Middle Eastern candor in his assessment of peace and violence in Islam. Tragically, he was himself killed by a suicide bomb in 2013.

Instead of seeking to redefine Islam, Qureshi believes we should consider more thoughtful and honest approaches. The question of whether Islam can be a religion of peace in spiritual or idealized senses ought to be considered, but the implication that Islam is a religion devoid of violence is simply false. The frequent proclamations by leaders and media members of Islam’s peacefulness may be well-intended, but more is needed than good intentions.

Instead, Qureshi says, “We must open our eyes and not allow ourselves to remain blind to evident facts in our attempts to either protect or sway Muslims. Though violence is writ large throughout the pages of Islamic history, including in its foundations, that does not mean our Muslim neighbors are violent. Muslims deserve to be treated with the kindness and respect due to all people.” In fact, their journeys may be leading many of them to confront Islam’s violence for the first time, as Qureshi’s journey once did, and they, too, may be approaching a critical three-pronged fork in the road.

Qureshi concludes, “May our eyes and our arms both be open to them.”

Please join me next Friday for Qureshi’s Question #3 – What is Jihad? It is important for me to state that I do not support the religion of Islam ideologically or theologically. I am a Christian, who is a novice scholar of comparative religious study and an apologist. Indeed, Nabeel Qureshi is no longer a Muslim, having converted to Christianity after his exhausting study on the question of violence and jihad in Islam.