The Peacemaker: A Biblical Perspective on Resolving Personal Conflicts and Letting Go of Resentment. 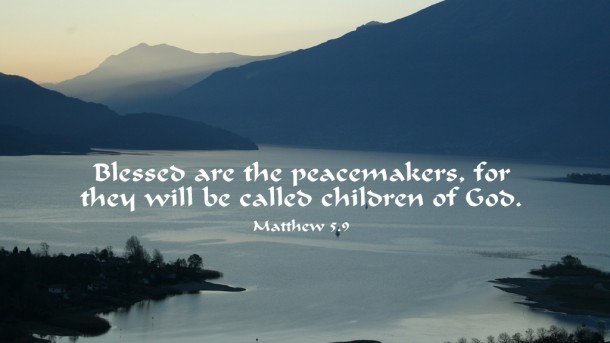 The goal of a peacemaker is to magnify the marvelous undeserved forgiveness that God has given to us through Christ and to inspire people to imitate such forgiveness to others. Jesus told us in the Sermon on the Mount, “Blessed are the peacemakers, for they will be called children of God” (Matthew 5:9). As Christians, it is very important that we understand this verse correctly. Note we’re admonished to be peacemakers not peacekeepers. It would be a drastic error to misquote the Words of Jesus. Although it might sound like mere semantics, Christ urges that we make peace rather than keep the peace. The Gospel and peacemaking are interdependent. The Gospel is the very catalyst for peace. As believers, we are incapable of promoting real peace in the flesh. It requires the power of the Holy Spirit.

Peacemakers strive to make peace and attempt to reconcile things and people that are at odds with one another. Peacekeepers, on the other hand, strive to keep peace at all costs. Proverbs 10:10 says, “People who wink at wrong cause trouble, but a bold reproof promotes peace” (NTL). Peacekeepers, by not acknowledging wrongdoings in an effort to make peace, are actually winking at them. We must be about peacemaking as believers. My church contains in its bylaws language about peacemaking being part of our mission.

Speak the Truth in Love

Peacemaking does not—indeed, cannot—happen by accident. It is a purposeful act. In fact, peacemaking is a higher priority than worship. Of course, love is the underlying commandment. John 13:34-35 says, “A new commandment I give you: Love one another. As I have loved you, so must you love one another. By this everyone will know that you’re my disciples, if you love one another” (NIV). People should be able to catch a glimpse of the Father when they look at us.

Ephesians 4:15 says, “Instead, speaking the truth in love, we will grow to become in every respect the mature body of Him who is the head, that is Christ.” Words play a key role in almost every conflict. When used properly, words promote understanding and encourage agreement. When misused, they usually aggravate conflicts and drive people further apart. If your words seem to do more harm than good when you try to resolve a disagreement, don’t give up. With God’s help you can improve your ability to communicate constructively.

Bring Hope Through the Gospel

When someone has disappointed or offended us, our human reaction is to come at them with the law, lecturing them about what they have done wrong and what they should do now to make things right. This approach generally makes people defensive and reluctant to admit their wrongs, which makes a conflict worse. The Lord is graciously working to teach us a better way to approach others about their failures. Instead of coming at them from a position of legalism, we need to bring them the Gospel. In other words, rather than dwelling on what people should do or have failed to do, we must focus primarily on what God has done and is doing for them in Christ. This is commanded throughout Scripture.

When Jesus confronted the Samaritan woman, instead of hammering away at her sinful lifestyle (as many pastors sadly do today), He spent most of His time engaging her in a conversation about salvation, eternal life, true worship, and the coming of the Messiah (see John 4:7-26). The woman responded eagerly to this Gospel-focused approach, let down her defenses, and put her trust in Christ. Although Jesus changed this focus when rebuking hard-hearted Pharisees, His typical approach to bringing people to repentance was to bring them the Good News of God’s forgiveness (see Luke 19:1-10; John 8:10-11).

The apostle Paul had a similar approach, even when he had to deal with serious sin. In his first letter the Corinthians, he had to address divisions, immorality, lawsuits, food sacrificed to idols, and the misuse of the Lord’s Supper and spiritual gifts. But before addressing these terrible sins, Paul’s gracious greeting held out hope for forgiveness and change by reminding the Corinthians of what God had already done for them through Christ. What a marvelous way to set the stage for repentance and change. Paul always kept Jesus in the center of his instruction and admonishment by first providing the believers a detailed description of God’s redemptive plan. When Paul finally got around to addressing errors in the congregation, his readers were already standing on a foundation of hope and encouragement.

Paul took the same approach with the Philippians and Colossians, who also needed correction and instruction. He begins his letters to these two churches by drawing attention to what God has done in each of them. As he continued, he frequently referred to the Gospel as he moved from issue to issue. For example, look at what Paul writes in Colossians 3:12: “Therefore, as God’s chosen people, holy and dearly loved, clothe yourselves with compassion, kindness, humility, gentleness and patience.” Before admonishing these believers, Paul reminds them of who they are in Christ.

Be Quick to Listen

Another element of effective communication is to listen carefully to what others are actually saying. Knowing this is not in our human nature, James gave this warning: “My dear brothers and sisters, take note of this: Everyone should be quick to listen, slow to speak, and slow to become angry, because human anger does not produce the righteousness that God desires” (James 1:19-20, NIV). Good listening is particularly important for a peacemaker. It improves your ability to understand others, it shows that you realize you do not have all the answers, and it tells the other person that you value his or her thoughts and opinions. Even if you don’t agree with what others say or do, your willingness to listen demonstrates respect and shows that you are trying to comprehend their perspective. This typically helps create an atmosphere of mutual respect that will improve communication.

Waiting patiently while others talk is a key listening skill that is a must for all peacemakers. Without this skill, you will often fail to understand the root cause of a conflict, and you may complicate matters with inappropriate reactions. As Proverbs 18:13 tells us, “To answer before listening—that is folly and shame” (NIV). In other words, avoid jumping to premature conclusions about what others are thinking; give them time and hear them out. Discipline yourself not to interrupt others while they are speaking. Learn to be comfortable with silence and do not respond the moment there is a pause. Moreover, do not offer immediate solutions to every problem others bring to you.

Reflecting or “paraphrasing” is the process of summarizing the other person’s main points in your own words and sending them back in a constructive way. This is the very definition of active listening. Reflecting may deal with both the content of what the other person has said and the associated feelings. Reflecting does not require that you agree with what the other person says; it simply reveals whether you comprehend another person’s thoughts and feelings. Reflecting shows that you are paying attention and you are trying to understand or empathize with them. Besides, reflecting what others are saying can make them more willing to listen to what you want to say.

Engage Rather than Pronounce or Declare

One of the fastest ways to make people defensive is to abruptly announce what they have done wrong. If you launch into a direct and detailed description of their faults, they are likely to close their ears and launch a counterattack. It is wise to think carefully about how to open a conversation in a way that shows genuine concern for the other person and engages him in listening to your words without becoming defensive. If you are going to be candid—this is often doable when speaking to a close friend—you should first affirm your respect and friendship and then describe your concern in direct terms. If strong trust has not been built between you, however, or if the issue is likely to trigger defensiveness, you would be wise to broach your concern in an indirect way that engages the other person’s heart and mind without putting him instantly on guard.

Whatever approach you use, your goal should be to describe your concern in a way that captures others’ attention, appeals to their values, and gives hope that the issue can be resolved constructively. The more you engage another person’s heart and the less you declare his or her wrongs, the more likely he or she is to listen to you. Communicate clearly enough that you cannot be misunderstood. Many conflicts are caused or aggravating by misunderstandings. People may say things that are actually true or inappropriate, but because they did not choose their words carefully they leave room for others to misconstrue what they mean and take offense. Fewer factors can derail peacemaking than miscommunication.

Use the Bible Carefully

It is often helpful to refer to the Bible as a source of objective truth when you have a disagreement with another Christian. If this is not done with great care, however, it will alienate people rather than persuade them. Never quote the Bible to tear others down, but only to build them up in the Lord. Make sure to use Scripture passages for their intended purpose. Never pull a verse out of context and try to make it say something other than its clear meaning. It’s advisable to encourage others to read the passage from their own Bibles; then ask, “What do you think that means?” This typically yields far better results than imposing your interpretation on them.

It is also paramount that you know when to stop. If the other person appears to be getting irritated by your references to Scripture, it may be wise to back off and give him or her time to think about what you’ve presented to them.

Effective confrontation is like a graceful dance from being supportive to assertive and back again. This dance may feel awkward at first for those who are just learning it, but perseverance pays off. With God’s help you can learn to speak the truth in love by saying only what will build others up, by listening responsibly to what others say, and by using principles of wisdom. As you practice these skills and make them a normal part of your everyday conversation, you will be well prepared to use them when conflict breaks out.  In developing the skills of loving confrontation, you can see for yourself that “the tongue of the wise brings healing.”

God bless and thanks for reading.

Join me next Monday when I wrap up this series on peacemaking. We’ll look at the importance of taking one or two others along when confronting others in the interest of peace. Matthew 18:16 says, “But if they will not listen, take one or two others along, so that every matter may be established by the testimony of two or three witnesses.