In a growing number of towns, police aren’t arresting people facing addiction. Instead, they’re providing a doorway to treatment.

Judge Linda Davis hasn’t only seen the toll opioids take from the bench. She’s also seen it at home—with one of her daughters. “I thought our family would be the last family on earth this would happen to,” she says. “I was a judge and a former prosecutor who’d run the drug unit. We talked about these issues constantly.”

Then one of her daughters—a fine student and athlete—got hurt at age 17 and needed knee surgery. Pills were prescribed. That led to heroin. And later, a four a.m. confession: “Mom, I’m a heroin addict. I need help.”

That was 12 years ago: Davis’ daughter has been clean since then. “I’m just one of many parents with a story like that,” Davis says. “It amazes me that every time I share it, someone says, ‘I have a son or daughter or grandson or nephew or mother or grandmother with a problem like that.’ It’s that widespread.” Davis hasn’t stopped at telling her story. She volunteers her lunch hours to serve on drug court on top of her normal docket as a judge in Clinton Township, Mich. She co-founded a group, Families Against Narcotics (FAN), which has spread across the state. And that group is taking a leading role in promoting a new approach to fighting opioid addiction.

In May 2015, Gloucester, Mass. Police Chief Leonard Campanello posted a Facebook announcement: Anyone could come to the police department, report an opioid addiction, and police would get them into treatment. No arrests, no punishment. Just help. In the first year, 376 people showed up. Almost 95 percent got direct referrals for treatment. Today, that’s grown into a national program: the Police-Assisted Addiction and Recovery Initiative (PAARI), with nearly 400 participating police departments in approximately 30 states. Some 12,000 people have been ushered into treatment so far.

The largest of those partners is Macomb County, Mich., comprised mostly of 860,000 Detroit suburbanites—FAN’s home base—where an important new element was added. FAN’s idea, successfully pitched to police and community leaders: Rather than burden police in such a populous area with getting people into treatment, specially-trained community volunteers—known as “angles”—would help with the load.

Under the Macomb County program—called “Hope, Not Handcuffs,” an angel is called to the police station to give one-on-one attention to the person reporting an addiction. The volunteer sits with him or her, helps fill out forms and makes the calls to get into a treatment center right away. The angel is there after treatment too—helping, if needed, to find housing or support services, among other things.

It’s an approach which has captured a lot of hearts and minds. Some 250 people have stepped up to the angel role. Three emergency-service ambulance companies agreed to provide free transportation to treatment centers. Hope Not Handcuffs already is operating in eight Michigan counties, and spreading. “The program started a little over a year ago, and already we’ve placed almost 1,300 people in treatment,” Davis says. “We’re working with up to 90 police departments on implementing this in the state of Michigan. “We get calls from all over the U.S. wanting to initiate the program. But as an all-volunteer group, we don’t have the resources to coordinate with them. We can’t grow that fast.”

After decades as a judge and prosecutor, Davis is struck by the change in law enforcement’s approach. “Police officers are leading the charge for reforms,” she says. “We’ve had a big shift from the ‘lock ’em up’ mentality they were taught in the academies. “Now you’ll hear officers say it all the time: ‘We can’t arrest our way out of this. This is a disease, and locking up people with a disease won’t work.’ For them to say that is really changing the stigma of addiction and opening up new possibilities.”

Signs of that changing mentality in law enforcement are popping up all over. There are more than 3,100 drug courts in the country, the U.S. Department of Justice reports—specialized docket programs focusing mostly on treatment and rehabilitation. Roughly half of them deal with juveniles; the other half, with adults.

In Macomb County, a lot of people are grateful. And some are giving back. Micki Dodson’s mom was an addict. Micki, now 30, eventually followed in her footsteps, spending the better part of a decade on pills, heroin, and crack cocaine. Only after her mother died of an overdose last year did she turn the corner. Dodson has been clean since May 2017, and she’s scheduled to graduate from the drug court program in October. “I’m a huge fan of Hope Not Handcuffs,” she says. “Drug court has been my saving grace. I can’t thank them enough: They worked wonders for me. I couldn’t stay clean on my own.”

Now Dodson plans to undergo angel training, so she can do for others what someone did for her. “I have to give back,” she says. “It helps me. I want to let them know there’s hope. If I help one person today, I’ve done my job for that day.” 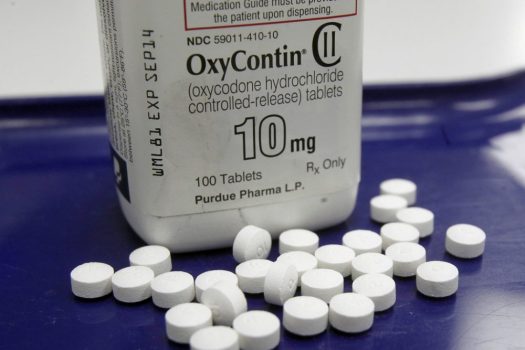 Anthony Mattarella is giving back too. Much like Davis’s daughter, he was injured in his youth and went from prescription opioids to heroin and other drugs. That lasted eight years, with numerous fruitless stints in jail or rehab. Three years ago, when his case was bounded over to Davis’ drug court, things changed. “Before I got into the program, I wanted to die,” Mattarella says. “When I got in, I was willing to do anything they asked of me. I knew I was either going to kill myself or I was going to get sober.”

Now he’s a peer-recovery coach for 41B Drug Court in Clinton Township, Mich.—the same court where Davis serves. He’s helping lost people find their way, using his experience to connect with them and guide them. “It’s so rewarding,” he says. “I see them go through the [recovery] process; I see the smiles on their faces when they start to understand.”

Looking back, Mattarella marvels at the change in his life.

FOR MORE INFORMATION: To learn more about Hope, Not Handcuffs, go to familiesagainstnarcotics.org/hopenothandcuffs. For more information on the Police-Assisted Addiction and Recovery Initiative, visit paariusa.org.

One Reply to “The Opioid Issue: Part 6”