AMERICA IS IN A DARK season. The news is chock full of stories about murders, mass shootings, racial unrest, sexual immorality, genocide, terrorist threats, rampant drug and alcohol abuse, and suicide. This is the backdrop against which biblical principles are being challenged and pushed aside in a modern culture of pluralism and so-called open-mindedness. Atheists today have taken on a militant posture. No longer content with merely not believing in God as a personal choice, they have taken to calling Christians delusional, stupid, crazy, elitist, bigoted, gullible, narrow-minded. Richard Dawkins—author of The God Delusion—says, “Religion is capable of driving people to such dangerous folly that faith seems to me to qualify as a kind of mental illness.” Christopher Hitchens said parents “forcing” their Christian faith on their children is nothing short of child abuse. He compares belief in an all-powerful deity to believing in Santa Claus or the tooth fairy. Karl Marx said, “Religion is the sigh of the oppressed creature, the heart of a heartless world, and the soul of soulless conditions.” 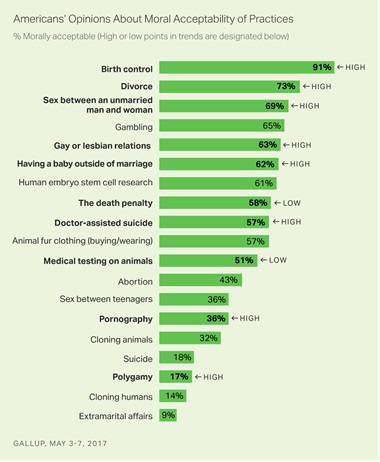 News stories on the networks and in newspapers show a growing moral and social crisis in America today. Our nation has been taking a position against God in landmark cases for the last five decades: teacher-led prayer was forbidden in public schools (1962); Roe v. Wade sanctioned abortion on demand all throughout America (1973); display of the Ten Commandments was forbidden on publicly-owned property (2005); Obergefell v. Hodges sanctioned same-sex marriage (2015), and today the debate over gender identity issues are in full swing. Ask Americans about their personal views on moral issues, and they are more likely than ever to hold a liberal position. Ask them specifically about morality in America, and you will see they are becoming more pessimistic with each passing year. A recent Gallup poll found a widening embrace for numerous moral issues, including record-high acceptance for gay relationships, divorce, pornography, polygamy, and physician-assisted suicide.

Christian morality used to be something people were afraid to violate. In May 2017, Gallup and LifeWay Research released polls indicating 4 out of 5 Americans are worried about the moral state of our country. One poll shows 77 percent believe the country’s values are getting worse—the highest level since Gallup started tracking this topic in 2002. Historically, social conservatives, including evangelicals and other people of faith, have been the most negative about American morality; raising concerns about the liberal shift on issues involving family, sexuality, and sanctity of life. Democrats and Republicans look at the issue of morality differently—liberals and moderates are concerned over declining moral values, but, their focus is on the growing lack of respect or tolerance for others. They are also worried about the lack of proper parenting, which many believe to be at the root of this moral downturn.

“Sow a thought, reap an action; sow an action, reap a habit; sow a habit, reap a character; sow a character, reap a destiny.”

Some believers, me included, feel the reason morality is failing is because far too many laws regulating moral behavior have been repealed. A great deal of Christian pastors, apologists, evangelists, and writers have taken heed to the falling numbers, but decades of pitting “Christian worldview” against “moral relativism” has caused the forming of habits that are rather hard to break. For example, many Christians assume the reason for rampant immorality in our culture is due to people rejecting the idea of absolute right and wrong. Many believers think discussions over morals are likely to end with, “Well, you have your truth, and I have mine. Let’s just agree to disagree.” I believe disputes over morality in America are stronger today than they’ve ever been. But if we view these disputes through the lens of “moral relativism,” our understanding of today’s culture will suffer—our Christian witness will be severely blunted.

DO BIBLICAL PRINCIPLES SHAPE YOUR VALUES?

The apostle Paul says, “We demolish arguments and every pretension that sets itself up against the knowledge of God, and we take captive every thought to make it obedient to Christ” (2 Corinthians 10:5, NIV). Certainly, this is not an easy task. Moreover, it is not necessarily helpful to “preach” down to those we disagree with given the heavy-handed presence of moral relativism in America. How can we apply a Christian worldview to social and political issues? In addition, how can we communicate biblical morality effectively in a secular society?

First, it is important that we interpret Scripture correctly. Too often, Christians have expressed their sociological preferences on issues like homosexuality and abortion without proper biblical exegesis. The result is often a priori conclusions built upon the foundation of improper proof-texting. We should take a lesson from the apostle Paul’s direction that the first priority of Christians is to preach the Gospel. He refused to allow individual distinctions to hamper his effectiveness. In fact, he said, “To the weak I became weak, to win the weak. I have become all things to all people so that by all possible means I might save some” (1 Corinthians 9:22, NIV). As believers, we must stand firm for biblical truth; however, we must recognize the spiritual needs of those with whom we vehemently disagree regarding lifestyle or moral convictions.

Second, Christians should carefully develop biblical principles which can be applied to contemporary social and medical issues. Too often Christians jump immediately from Scripture to political and social programs. Unfortunately, they sometimes neglect the important intermediate step of applying biblical principles germaine to a particular social or cultural situation. Foundational biblical precepts that undergird the law of God in the Old Testament are essentially values or social norms steeped in Jewish law and tradition. The Torah contains 613 commandments or precepts, which include “positive” and “negative” commands. Christians in the 21st century are not obligated to fulfill the requirements of the Law of Moses. This is the central message of Paul’s letters to the Galatians and the Colossians. In fact, Colossians 2:14-15 tells us that on the cross, Jesus took away the requirements of law-keeping. Of course, there are laws in Leviticus, Numbers, and Deuteronomy that Christians are bound to, but this is not because they are in the Mosaic Law. Rather, as Christians we are bound to obey the command and example of Jesus. We are to tread gently, motivated by love, not hatred.

Love should characterize Christians, especially when the days are dark and filled with hate.

We must look to the teachings of Jesus and the apostles to determine the “rules” of Christianity. I am not saying that the laws of the Old Testament are meaningless. Not at all. Examples of what the Hebrews did and how God responded—blessings versus curses—are great lessons for us today. Paul writes, “Now these things occurred as examples to keep us from setting our hearts on evil things as they did… These things happened to them as examples and were written down as warnings for us…” (1 Corinthians 10:6, 11, NIV).

For the Christian, the current social crises are indeed troubling. But Jesus called us “the salt of the earth and the light of the world” (Matthew 5:13). In these dark days we need to respond as salt (i.e., godly preservative in a rapidly declining culture) and light (i.e., evangelists who shine brightly in a dark society). We need to cultivate a biblical perspective on the current social crises. And we need to respond as God’s people, with God’s perspective, regarding the events of these days.

Will we let our light shine in the midst of this dark season of uncertainty? Will we keep our focus and trust on Him as our sovereign King? Will we point others to Him as we allow our light to shine for Him? Or will we live in a manner that serves to detract others from Christ? We cannot forget that it is our joy and privilege to shine as lights in the darkness.

Poetry for the People

Out of His Heart Will Flow Rivers of Living Water ~ John 7:38